I have said before that in birding (as well as other things) sometimes one man’s ceiling is another man’s floor. In September of 2014, with our wonderful friend Linda from New Mexico visiting us in North Carolina, we dashed up to Cape May, NJ to twitch a Whiskered Tern. Sure we had seen hundreds in Oz, and our Aussie friends laughed at us, but this was quite a rarity for the US. And when a Laughing Gull, quite a rarity for Oz, showed up in Venus Bay, South Australia, I wanted it on my Australian list. I am sure some of our North American birding tribe found this funny as well.

My childhood was spent along the waterfront of Hampton Roads in tidewater Virginia. I grew up around the water. I spent much of my time fishing and crabbing. I loved it. The sound of a Laughing Gull is a part of my soul. I am now an expat in Oz and I reckon so is this gull. I love Australia. I love it (and my grandchildren) so much that I am going to live here. But it has been far from easy on a lot of levels. So I feel a real connection with this expat North American Gull.

We were on the coast of New South Wales when I began to seriously entertain the idea of twitching this bird. I spoke with Kay Parkin who had just seen it. She thought that in its molting condition and with its comfortable food and lodging at the caravan park, it would be around for a while. We decided to go for it. We started southwest and stayed at our dear friend, Robert’s house in Parkes, NSW. If you have never seen the film, “The Dish” rent it, stream it, whatever, just watch it. It is wonderful, and it took place in Parkes. We had a lovely visit and left a bit late Thursday morning. We drove to Hay, NSW. Not much to say about Hay or that drive. We passed through the Shire of Bland, literally and figuratively. Honestly though, it is lovely out there in its open, scrubby Aussie way. I am grateful.

We decided to do a longish drive on Friday and made it to Burra, SA where we stayed in a very old, but VERY cold stone cabin. It is gorgeous in that part of South Australia. Lynn described the luxuriant green of the hillsides as “emerald” and they were. It was lovely driving through there and it put us within striking distance of Venus Bay, SA on Saturday. 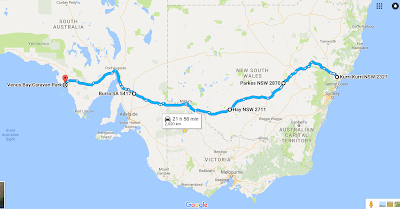 The drive from Burra was about 7 hours and we rocked up at the Venus Bay Caravan Park just after 2pm. I immediately asked about the gull. I had spoken to both Ruth and Linda of the caravan park a few times on the way (wonderfully sweet, both) and they knew who I was and why we were there. Ruth said that the gull was definitely around and it would show up soon. After maybe fifteen minutes of giving me heart palpitations by its absence, show up it did! I was standing amongst a group of Silver Gulls when Lynn said, “Look at that one.” Right in front of me, the Laughing Gull had snuck in. Neither of us saw it arrive, it just seemed to appear there. It touched my heart. I am grateful. 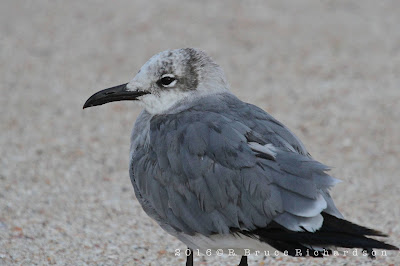 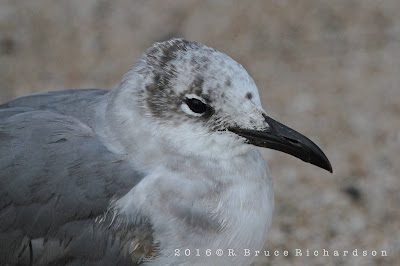 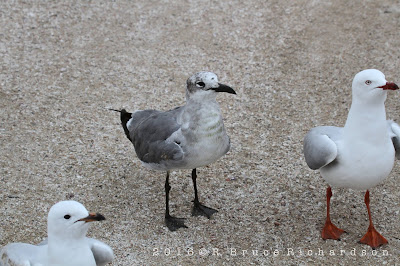 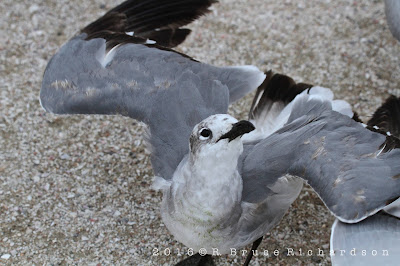 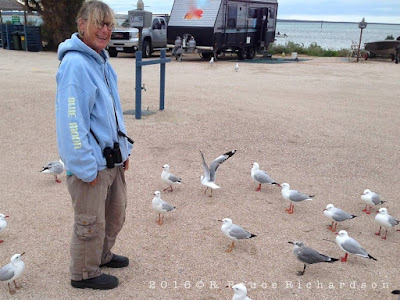 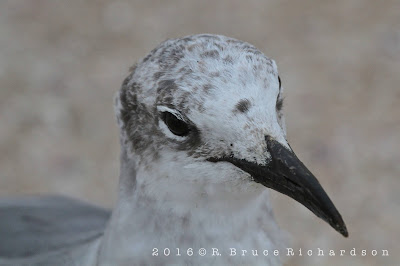 After about a half an hour of drinking-in the reality of this wonderful widely traveled gull, we checked in and settled into our cabin. I opened a cold non-alcoholic beer (my favorite, Erdinger) and just looked out at the water. We have a wondrously gorgeous view of the bay. The cabin is comfy, cozy, and beachy. It is exactly my kind of place. They have takeaway here at the caravan park and I had some excellent butterfish F&C and Lifer Pie of ice cream on a stick. I am so very grateful. 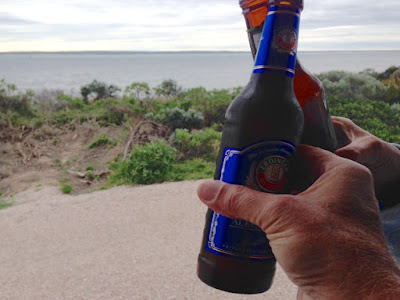 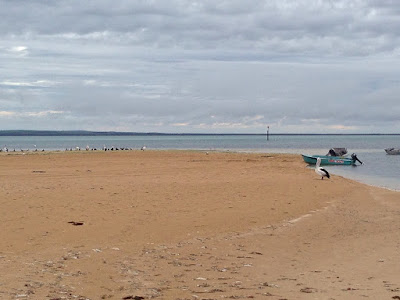 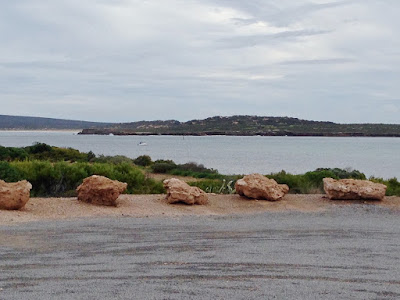 This morning I wandered down first thing to check on my new gull pal. He was right there. I took some more photos and had a visit with a Victorian twitcher friend, Alan Crawford who had flown over from Melbourne and was staying in one of the cabins as well. This is a wonderful place and I am glad that it is benefiting from the LAGU.

After Lynn and I had a walk around, I am ready for a lazy Sunday arvo on the bay. Sending love and peace from Venus Bay, SA. I’ll keep y’all posted. Here are some photos from our little walk (I do love me some Pelicans). 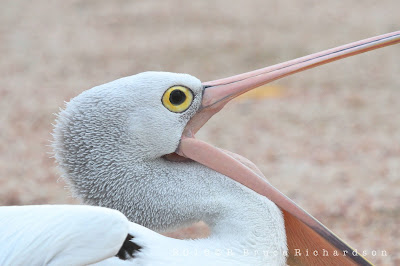 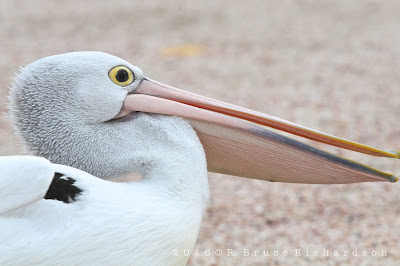 R. Bruce
I am a writer and a professional entertainer, singer/songwriter of humorous songs. I am also mostly retired and an avid birder. I am against anything that kills people or destroys the planet on which we live. I support the American Birding Association, Birdlife Australia and Black Swamp Bird Observatory amongst other conservation minded organizations. I am an environmentalist and a feminist. I believe in equality. I believe in recognizing that for which I am grateful and taking notice of it. That is how these posts began. I was born in the USA, but I have been an Australian Permanent Resident since January 2012 and live in AUS permanently. Please visit: www.rbruce.net